I remember when I first became a vegan, one of my main concerns was becoming a “preachy vegan”.

The ones that get disgusted at the sight of their peers eating animal products. The ones who are sharing PETA footage on their Facebook feed every day. Or the ones who write EARTHLINGS on every public building in sight.

As I discover more information about animal liberation, I’m starting to understand why people feel the need to express themselves this way. Truly understanding, embracing veganism makes you angry at the human race in general.

As Gary Yourofsky says in this interview; 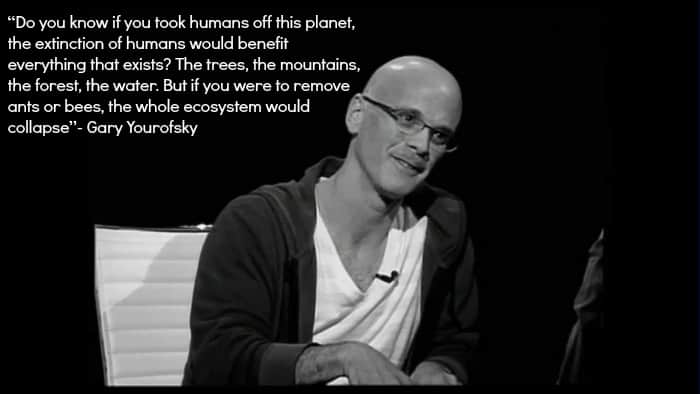 In fact, we do nothing but harm the natural resources that we have. We have progressed and developed purely for our own benefit.

So yes, while it’s true that we’re not doing much to help the environment, the risk for any vegan is feeling like they are a better person than a person who is not. And this type of energy leads to tension between vegans and non-vegans, and quite frankly, leads to more resistance and little results.

So on one side of the spectrum, you have advocates like Gary, who are calling humans out all the time. He’s effective in questioning human values and comparing veganism to the Holocaust, slavery and discrimination.

He uses graphic language like, raping, animal flesh, puss, slitting throats, chickens ass. He’s not interested in positioning the health or environment benefits of veganism. He wants you to feel shit about yourself, to the point where you start changing your behaviour.

Then you have people like Kris Carr, who inspire people through the health benefits of plant-based living. She uses food, health and lifestyle as a vehicle to get people to make a positive change.

But while her advocacy is not as in-your-face as Gary’s, don’t be fooled that she isn’t trying to use her media platform to get people to become vegans. As she eloquently says in her interview with Jonathan Fields, when he asked her about legacy;

From what I’ve seen, the latter is a more effective way to get people to live vegan lifestyles. But that’s just my opinion.

So that’s what I want to get your feedback on.

As a vegan, do you have internal battles about how you want to express yourself to others? Are you the more conservative type or do you have no problem calling people out?

And for those who are not vegan, what kind of communication are you likely to be more receptive to?

I’m interested to see where you stand on how to deliver this message. Post your response in the comments below so we can get a conversation going.

PS – we recorded a podcast episode about the perception of preachy vegans.