But Plants Have Feelings Too, Don’t They?

Do plants feel pain? Do they have feelings?

As you process these questions, you probably have a natural assumption that plants do or do not feel pain.

Whatever your stance, it may seem pretty straightforward. As it turns out, the answer to this question can be complex.

Then you non-confidently mumble back a response about how plants don’t have a central nervous system so scientifically, they can’t feel pain.

While this statement is somewhat true, there’s more to consider about the sentience of plants.

I get the intent behind the questions. If plants have feelings and can experience pain, then what’s the difference between eating animals and plants? Why is there a hierarchy of suffering?

This post is my attempt to present arguments for and against the “plants have feelings too” debate, before weighing in on my own opinion towards the end.

Let’s get into it.

What’s pain, and how does it work?

To understand if plants feel pain, we must first define what pain is.

A quick Google search reveals that pain is a highly unpleasant physical sensation caused by illness or injury.

As explained in the textbook Pain and Disability: Clinical, Behavioral, and Public Policy Perspectives, pain receptors which are present in most body tissues, respond to damaging or potentially damaging stimuli.

Messages initiated by this stimuli are transmitted by nerve cells to the spinal cord and the brain (your central nervous system). If the brain perceives the threat to be legitimate, it responds by creating a sensation of pain to direct attention to the body part so that the danger can be mitigated.

It’s like if you were to hit your big toe on the bottom of your bed frame. The impact of the connection creates stimuli. From there the nerve cells get sent to your brain, which the brain approves and creates the sensation of pain to your big toe.

With this information, you analyse the risk of further pain by avoiding repeated action. Additionally, your brain signals to not to put pressure on your toe to give it time to heal.

We must also remember that pain is a subjective emotion, not just a physical response. This is why animals can experience complex pain-related emotions like fear, sadness and anger.

For example, a cow can experience trauma from being separated from her calf after birth, much like how a human mother could experience the same emotional pain in the same situation.

To summarise, pain is the process of turning stimuli into a subjective emotional experience to mitigate future risk and promote healing.

Plants are living organisms that come in many different forms. We’ve come to know them as trees, shrubs, herbs, grasses, ferns, and mosses.

There are three basic structures of a plant:

There are almost 400,000 plant species, and scientists are discovering more each day.

To put it simply, plants rule the world—representing 80 per cent of the earth’s biomass.

Personally, I love plants as we owe our existence to them.

It’s essential to acknowledge the overwhelming significance of plants as we consider the emotions of this infinitely generous species.

A case for why plants feel pain and have emotion

In this next section, I break down three case studies that are regularly referenced when making an argument that plants feel pain.

Where possible, I’ve linked to the papers for your perusal.

1. Plants can hear themselves being eaten by caterpillars

The study involved placing caterpillars on plants called Arabidopsis, then using lasers and reflective materials to measure the movement of the leaf in response to the caterpillar munching.

The recordings of the caterpillars feeding vibrations were played back to a set of plants and played silence to another set of plants.

It was found that the plants that had been forced to listen to the sound of the vibrations from the munching produced more mustard oils, which are chemicals insects don’t like.

The argument here is that plants respond to pain by producing defence mechanisms when they detect a threat.

2. Plants can communicate with each other

In a paper published in 1983 titled Rapid Changes in Tree Leaf Chemistry Induced by Damage: Evidence for Communication Between Plants, researchers found signs of communication amongst maple trees as a response to intentionally cutting their leaves.

Specifically, increased rates of synthesis and phenolic compounds were found amongst a group of maple seedlings 52 hours after having 7 per cent of their leaf area removed from tearing.

The argument here is that plants can release chemicals as a form of communication to warn other plants of the threat, as a reaction to pain.

This paper was met with a lot of controversies as early studies could not be replicated.

Then another paper published in 2014 titled Volatile communication between plants that affects herbivory: a meta-analysis, stating that they found 48 well-replicated studies since the 1983 research. Through their meta-analysis, they found overall support for the hypothesis that resistance increased for individuals with damaged neighbours.

But like most research, they stated in the conclusion that more testing is required for consistency of results, and adjusted for environmental variables. For example, all of the studies reviewed so far occurred in a lab, not in nature, which may be a factor when analysing the communication between plants.

The other question mark in the testing is the lack of reciprocation in communication between the plant subjects. It appears that when herbivores attack a plant, the plant emits communications to others, but there’s no evidence of the other plants communicating to the emitter.

This suggests that the response of the emitter is more of a message or broadcast of warning, as opposed to a cry for help.

3. Plants are reportedly “screaming” when under stress

Specifically, they recorded the sound waves over some time for tomato and tobacco plants when dry, cut, and normal.

The results showed that when the plant was under stress, e.g. dry or cut, they found the plants began to emit ultrasonic sounds between 20 and 100 kilohertz.

Plants emit sounds that humans can’t hear (without assistance), so the researchers used ultrasonic microphones to detect the sound waves in the study.

Keep in mind that this paper is not peer-reviewed at the time of publishing this post.

But the results do raise an interesting element to the “plants have feelings” debate.

If plants are, in fact, screaming when under stress, we can make some assumptions that they do at least react to pain.

Whether it’s reacting to vibrations, sending warning signals, or literally screaming, we still have much to learn about plants.

These examples together are put forward a compelling case for plants being able to experience pain.

Having said that, the argument for why plants don’t feel pain or emotions doesn’t need much explaining. It all comes down to biology.

As explained earlier in this post, pain is an experience that incorporates communication between stimuli, receptors, cells, and the central nervous system.

It’s one thing to merely react to a threat, and it’s another thing to intellectualise it.

Animals suffer from pain because they consciously process pain. It’s the brain and spinal cords which make us aware of the pain, again, which is a subjective response based on complex emotions.

The examples of plants releasing chemicals and sounds without the processing from a central nervous system can be considered to be a basic stimulus-response.

It’s similar to how plants react to stimulus from the sun, water, or soil.

These responses draw comparisons to technology. For instance, when you press the button on a doorbell, it responds by making a noise.

Or when the battery on your phone gets low, it responds by flashing.

These are responses, not intellectually processed emotions.

Another example that is perhaps more relevant than technology is the well-known plant, Venus flytrap.

Venus flytrap is a carnivorous plant that eats insects, frogs and human flesh if given the opportunity.

This unusual plant lures in prey by using sweet scent from its nectar. Once the prey is at the jaws of the Venus flytrap, the plant gets ready to snap shut.

Professors from the University of Tasmania have said that Venus flytraps don’t recognise animals; they respond to mechanical stimulation.

This is further proven by the Venus flytrap responding to a cigarette placed in its jaws.

If the plant had a central nervous system, it would be able to consciously discern its prey to consume the most optimal nutrients for its biology.

You can’t just give any animal a rock to eat—they would consciously process potential food using their sensory cells and their brain. It’s the same system used to process fear, sadness and suffering.

My final thoughts on whether plants have feelings

There’s no question that we’re learning more about plants every year, and the research about how they respond to stimuli is fascinating.

But even after reading the research, I couldn’t see any clear peer-reviewed evidence of plants showing anything beyond mechanical response to stimuli.

The examples of plants responding to cuts, munching on leaves and drought seem obvious to me. Plants also react to music, quality soil, surrounding objects and sunshine.

Does it mean that they’re consciously responding to these situations? I think not.

Now, are plants living organisms? Absolutely, and humans generally treat them that way. We often refer to a plant as happy, sad, dead or alive.

But the absence of a brain limits a plants ability to take stimuli and process a conscious subjective response. Well, as far as we know.

So while I can’t definitively say that plants don’t have feelings, I’ve seen more evidence that they don’t.

For me, the deal-breaker is the difference between a mechanical response and a conscious response.

I’d love to hear from you now. What do you think? Do plants have feelings?

What are your thoughts on mechanical and conscious responses to threats? Let me know in the comments below. 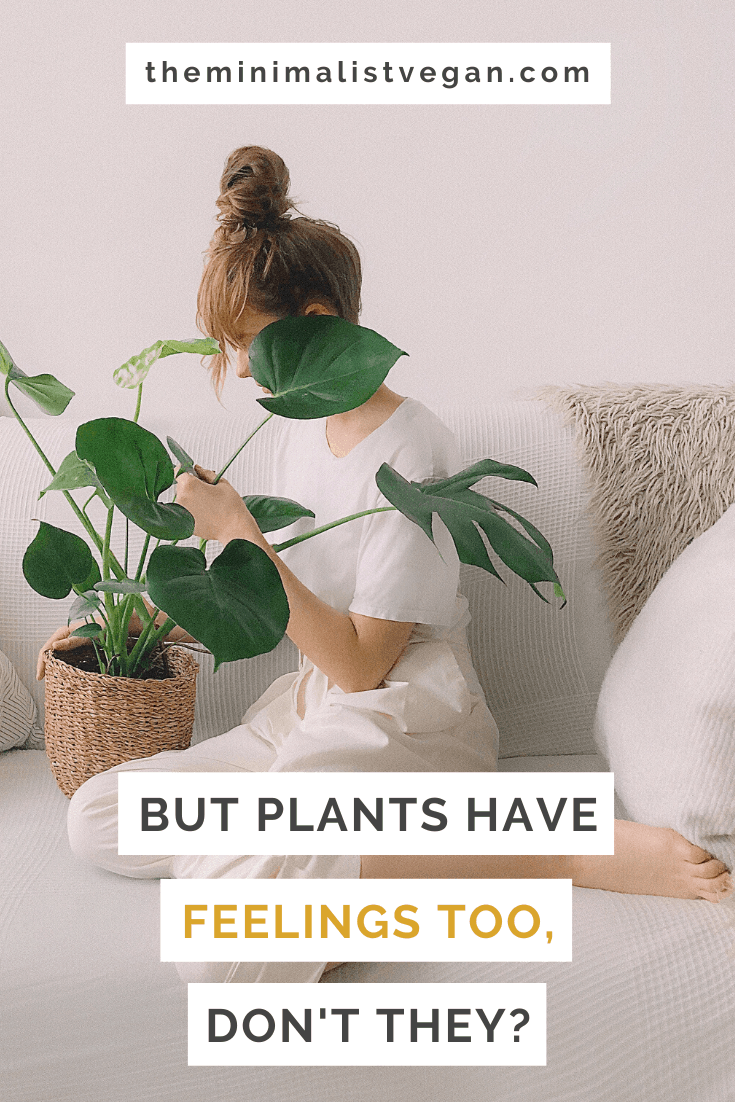 14 thoughts on “But Plants Have Feelings Too, Don’t They?”