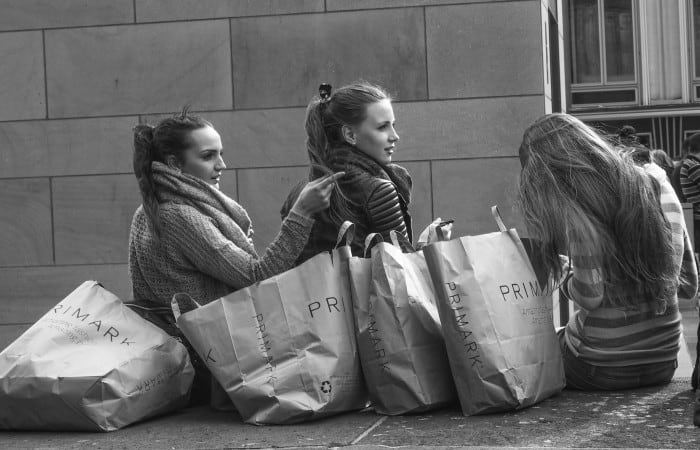 Ever since embarking on my journey as a minimalist vegan, I’ve been afraid of learning the truth. I’ve been fearful because my brain is conditioned in a way where I’ll need to take action (i.e. make uncomfortable lifestyle changes) if I get exposed to what’s happening behind the scenes of mass-industries.

It’s been true in learning about the effects of brainless consumerism, the terror of animal agriculture, and the toxic chemical’s used in the personal care industry.

So every time I’m about to learn something new, I brace myself for change. And fashion has been the elephant in the room for a little while now.

The food industry, while it’s still evolving, appears to be more heavily regulated—with labelling playing a considerable role in our buying decisions. Not so much the case in fashion.

When we shop, all we have is a small label on the garment to work with. We have little knowledge of how the materials are sourced and how the clothing is made.

Thirsty for more information, Maša’s sister recommended that we check out a documentary called The True Cost. It’s an eye-opening film about fast-fashion, working conditions and environmental impact.

Like most experiences I’ve had in the past by discovering the truth, I once again felt frustrated, overwhelmed and sad.

How do we continue to let commerce exploit others (people, animals, environment)? I would have loved to have written a post about fashion, but in all honesty, I know little about the industry.

So I’ve sought out information from someone who studies ethical fashion for a living.

In this blog post, we pick the brains of Joshua Katcher, ethical fashion teacher and blogger at The Discerning Brute. He’s also the founder of men’s ethical clothing line Brave Gentle Man. Below Joshua responds to my questions about human rights and animal liberation as it relates to fashion.

Hope you get as much out of it as I did.

Quick note: we’ve since put together a large list of online ethical stores to help you shop in-line with your values.

What is fast fashion and what kind of pressure does it put on production?

The most straightforward way to look at fast fashion is to compare it to fast food; It’s quickly made in mass quantities, it’s harmful, and it disproportionately harms disadvantaged communities.

Fast Fashion is often associated with big clothing chains like Forever 21, H&M, Zara, The Gap, etc., where a high volume of sales are achieved through an ever-accelerating changeover of styles and influx of massive quantities of products (not merely a spring/summer collection and a fall/winter collection).

Furthermore, for mass-fashion to be profitable, it has to be cheap to make. This pressure to accommodate a consumer who believes fashion should be cheap and should always have access to more and newer things at a faster and faster rate exacerbates every pressure put on workers, animals and the environment.

Also, a tee shirt can cost $10, be worn for a few weeks and then thrown into the garbage when a newer, trendier one arrives. It’s disastrous.

How are big fashion companies able to charge so little for their garments?

When you begin tracing the value chain to it’s source, a major priority for fast-fashion brands is cutting costs at every link in the chain, so you begin to see things like cheap overseas labour, child labour, toxic materials produced in places with few environmental and workers’ rights regulations, and sub-sub-sub-contractors who are impossible to monitor, never mind regulate.

Newness is elusive, but it is something which is desired at an increasing velocity due to the immediacy through social media with which new fashion products can be seen, purchased and then considered old-news.

Are the working conditions/salary for garment makers in developing countries relative to that of the developed world?

Not at all. Human Rights Watch released a damning investigation and report of the leather industry in Bangladesh called Toxic Tanneries – revealing conditions for tannery workers, who are sometimes children with no protective gear, that would land managers and owners in jail in most developed countries.

In Uzbekistan, the world’s second-leading cotton producer, there is an industry relying on child-slave-labour in the cotton fields, as revealed in the Environmental Justice Foundation’s report and short-film White Gold. These materials end up on the Shelves in America, Canada, Europe and other developed areas even though the making of them would violate the laws of those very countries had they been made locally in the same way.

Conditions that result in mass deaths, like the Dhaka fire of 2012 in Bangladesh where workers were locked in to their factory to maximise product output, is all too easily forgotten and glossed over by the developed world because it’s out of sight, out of mind, and the fashion industrial media complex is so seductive with its propaganda.

What is the impact of GMO’s in the fashion industry?

I think what you’re asking is the effect of genetically modified cotton seeds from corporations like Monsanto upon farmers growing cotton in India. The farmer suicide epidemic (almost 14,000 farmer suicides in 2012 for example) predates the introduction of biotech cotton.

This sort of rate has been researched in various studies to be relatively consistent as far back as 1997. This does not mean that some suicides were not linked to GMOs, where companies doubled seed prices and forced many farmers into debt.

But the number of farmers who killed themselves who were specifically growing bt (biotech) cotton in several studies does not show a correlation or increase in suicides.

Biotechnology offers incredible solutions for fashion material production, especially when it comes to the removal of animals from the production process, thereby eliminating one of the most environmentally and ethically problematic elements of the fashion industry.

We have the ability to modify yeast cells, for example, to produce fibres, and this, when scaled up, could potentially replace traditional animal farming where sentient beings are reared, confined and killed.

Make no mistake, the mill of the future will look more like a brewery or laboratory than an industrial textile mill. Cellular farming, synthesising or culturing of animal materials already is taking off with companies like Bolt Threads, BioLoom, Modern Meadow, Biocouture, and Pembient leading the way.

Biotechnology is a methodology, and like any technology, it’s not inherently evil, though some do use it to exploit. It’s easy to put the “evil” label on it because it operates on a cellular or genetic level, which frightens many people, the promise of never having to slaughter an animal again for leather or fur or silk or feathers or wool is a pretty good reason to keep an open mind.

The problems with animal materials are countless, which is why I am writing a book on the subject. Ethical and environmental problems are probably the most widely researched—whether its the cruelty of wool shearing operations to the ecological impacts of leather production.

But there are also more aesthetic problems, like the perception that “real” animal materials like “real” fur and “real” leather equate to quality, that the look of animal materials brings us closer to nature, and that by wearing animal materials we take on the characteristics of that animal we see as beneficial to our own identities.

It depends upon what kind of leather you’re talking about. There are many ways companies source leather. Cheap leather often comes from India, China or Bangladesh where animals like cows, pigs, goats, cats and dogs end up as cheap “100% genuine” leather products in fast-fashion stores.

A heart-wrenching PETA investigation recently revealed dogs awaiting slaughter in a Chinese leather factory. For most designers, sourcing leather ends at the textile trade shows where leather manufacturers showcase and sell their goods, and are depended upon to be transparent. But most designers do not know the process of farming or killing the animals used for their leather products.

Hermes, for example, was recently in the spotlight when Jane Birkin asked to have her namesake removed from the legendary Birkin crocodile bag (which can cost upwards of $85,000) when a PETA expose revealed the filthy, cramped, concrete factory farm conditions that crocodiles endure, as well as a barbaric slaughter that involves a metal rod being shoved through the spinal canal to remove the spinal cord so the crocs can’t struggle.

The actual tanning of skin was once done with brain, urine and faeces (which is why tanneries were not pleasant places to be around back in the day) but now most leather is tanned with a soup of toxic chemical to get a skin, which naturally decomposes, to stick around for a long time.

Further reading: What Is Vegan Leather?

What are some good alternative materials to animal products?

I’m pretty excited about PiñaTex right now. It’s a felt-like, leather-like material made from the waste of pineapple farming. Microfibres, felted and recycled PET from soda or water bottle is fantastic, and textile recycling technology, in general, has improved drastically.

A company like Bolt threads is already producing spider silk at scale without actual spiders, which is pretty exciting. Hi-tech synthetics are always getting better and less environmentally impactful.

There really is no reason to keep using the clunky, slow and dirty method of growing fibres on animal’s backs for textiles anymore. It’s obsolete.

Do you have some tips for people who are looking to buy ethically made clothing as it relates to the materials, production and company values?

My advice is to consider yourself a citizen investor, not just a “consumer”. You put your money into the production processes you want to see flourish—because when you buy fashion you aren’t just lining the pockets of the designers, you are supporting an entire value chain.

Ethical fashion is expensive, that’s why I recommend finding a brand or two you believe in, saving up for one or two things, and buying the remainder of your clothes vintage or second-hand.