Is Silk Vegan? The Answer Lies In The Process 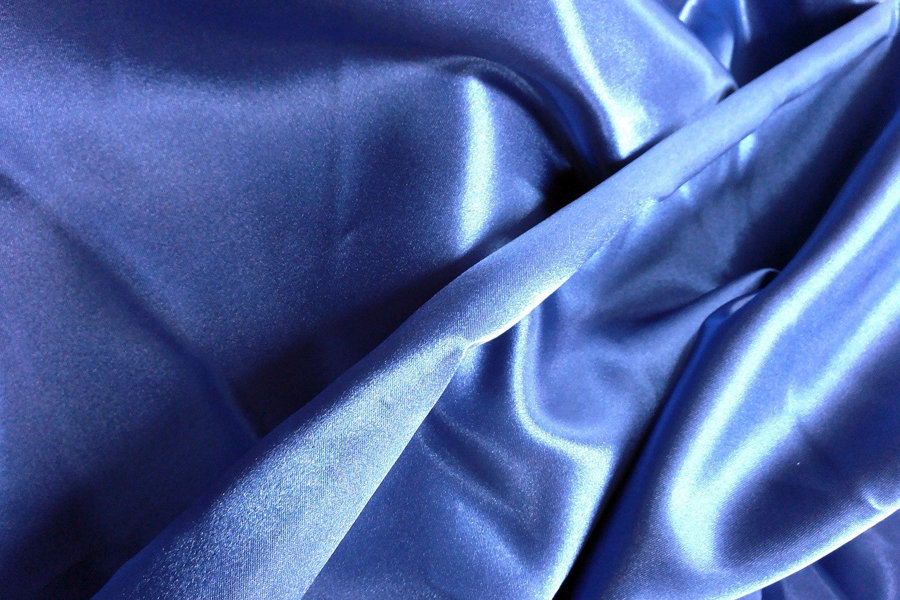 Is silk vegan-friendly? The answer may not be as simple as you think.

To get more clarity on the question, we need to pull apart the process of silk production—in addition to understanding how the industry works at large.

Let’s get straight into it.

Silk is a fabric commonly made from the cocoons of a domesticated caterpillar species (not worms) known as Bombyx mori.

I say “commonly” as mulberry silk which is made from the cocoons of Bombyx mori, represents 90% of the silk industry.

As it turns out, there are dozens of silk varieties harvested from different species of insects and spiders—but for this article, we’ll be focusing on mulberry silk.

Silk as a material is often referred to as the “queen of fabrics” due to its luxurious feel.

A very brief history of the silk industry

The domestication of the Bombyx mori for silk production was first discovered in China over 5000 years ago, 3630 B.C.E.

The knowledge of silk making was a secret in China for over 2000 years. Literally, no other country knew about this fabric.

Over time, Chinese immigrants brought the knowledge of silk production to North Korea, India, and eventually, the rest of the world.

Today China and India together produce more than half of the world’s silk! Honourable mentions go to Japan, Thailand and Italy who also have sizeable silk farming industries.

Together with bees, silkworms are the only other insect humans have domesticated. The survival of Bombyx Mori depends entirely on humans. All its wild populations are extinct, and only the domesticated ones live today.

At the time of publishing this article, the global silk market is worth over 15 billion USD and is projected to reach 16.94 billion USD by 2021. This is to say—silk is not a small industry by any means, and it continues to grow.

How is silk made?

To accurately assess the ethics of the silk industry, we must first understand the natural lifecycle of the Bombyx mori and then compare it to their lifecycle in a farmed environment.

The development of the Bombyx mori happens in four stages:

Let’s briefly look at each stage.

It’s fascinating to learn about creatures that go through metamorphosis. These little caterpillars experience quite the transformation in their lives.

The female Bombyx mori lays approximately 500 eggs about the size of an ink dot during summer or early autumn (fall). The eggs remain dormant until spring arrives.

In a farmed environment, farmers sometimes refrigerate the eggs for months at a time, up until a year.

During growth, the larva moults four times. The period between successive moults is called an instar. In the first moulting, the Bombyx mori sheds all its hair and gains smooth skin.

This stage of development lasts for about 27 days, and in that time, the Bombyx more goes through five instars.

At the end of this cycle, the Bombyx mori is 10,000 times heavier and 30 times longer than what it was during its first instar!

As the Bombyx mori prepares to pupate, it spins a protective cocoon about the size and colour of a cotton ball.

The cocoon is made from one continuous strand of silk which is approximately 1.5 km long (nearly a mile). That’s impressive!

In case you’re wondering, the silk is hardened by the saliva of the Bombyx mori. Silk, in this instance, comes out of the mouth, and not out of the rear end like a spider.

After the final moult inside the cocoon, the larva sheds its skin and develops into a brown, chitin covered structure called the pupa.

It takes about 2-3 weeks for the pupa to transform into an adult moth.

In the imago stage, the now moth has a unique spit which is used to dissolve the silk so it can push its way out of the cocoon.

This is the moment the Bombyx mori has been waiting for. The final evolution. So you may be wondering, what do they do now that they’re a fully developed moth?

Well, first of all, there are a few limitations for this little creature. Although these moths have wings, they are flightless. They also lack functional mouthparts, so they are unable to consume food. Bummer!

So what’s left to do?

Once the adult moth comes out of its cocoon, it’s only purpose is to find a member of the opposite sex and mate. That’s the singular goal here—no mucking around!

Males are larger than females and are more active. They flap their wings rapidly to attract females.

Within 24 hours of mating, the male moth dies, while the female lays eggs, after which it dies as well.

There’s a 5-10 day window of this activity before the moths naturally die. From there, the lifecycle of the Bombyx mori restarts.

In summary, we have a 6-7 week lifecycle which mostly involves eating mulberry leaves, transforming multiple times, and an intense week of trying to mate and reproduce.

That’s insect life for you!

So now that we know the natural lifecycle of the Bombyx mori without any human intervention, what does the process look like when harvesting silk?

There’s only one difference in the process.

If the pupa is allowed to mature into moths and break through the cocoon, the silk would be deemed useless for commercial purposes. Why is that?

Farmers want to cocoon intact so that they can extract all of the silk as efficiently as possible.

A person typically finds the end of the thread and places it on a winding bobbin, which is part of a sewing machine. Then machines are used to unroll the cocoon and turn strands into silk threads. From there the silk is woven into cloth.

This process is impossible if there’s a giant hole in the cocoon. And considering the silk industry is worth more than 15 billion dollars, we can’t be having these complications, can we?

To avoid commercial losses, farmers kill the pupae between 2 days and two weeks after spinning silk, and obviously before the insect becomes a moth.

Depending on the practice, farmers kill silkworms by baking, boiling, freezing or piercing the pupae.

The most common approach is plunging the encased insect into boiling water to kill the inhabitant and dissolve the glue holding the cocoon together. This is a crucial step in the silk production process as it ensures that there is no damage to the continuity of each thread.

Only a few moths are allowed to live to continue the breeding of Bombyx mori. This sounds eerily similar to the egg industry!

Interesting fact: Bombyx mori are part of cuisine in both Korea and China. They form part of a popular snack called beondegi, made from boiled and seasoned silkworm pupae. The Chinese also like eating roasted silkworm pupae.

After looking at the process, is silk vegan?

Veganism is an act of compassion, which means to act with benevolence towards other sentient beings.

Murdering the Bombyx mori in its cocoon against its singular desire to live long enough to reproduce is not an act of benevolence.

Oh, and we kill billions of these creatures each year. Over 6,500 Bombyx mori are killed to make just one kilogram (2.2 pounds) of silk.

So based on this basic premise, conventional silk as we know it, is not vegan.

Another consideration that gets brought up with the cruelty of silk is the sentience of the Bombyx mori. Many people believe these creatures are not developed enough to experience fear or pain.

Why should we care about a moth?

Moths get a bad wrap.

I get it. They don’t look super approachable, they destroy clothes, and they can be intrusive in our daily lives.

But did you know that moths come from an order of species called Lepidoptera, which is the same family as beautiful butterflies?

Yet, we see one as a nuisance that’s undeserving of life, and another as a symbol of joy and a “beautiful day”.

However, when it comes down to it, do these insects experience pain and suffering? After all, this is the question we ask ourselves when considering morality and benevolence towards species.

Both the butterfly and moth are insects and fall into the category of invertebrates—meaning they have no backbone and thus an insignificant central nervous system in comparison to vertebrate animals.

Why is this important to understand?

Well, it’s often argued that having a well developed central nervous system proves that a species not only mechanically reacts to pain, but also can perceive and feel pain.

While there are conflicting cases for and against invertebrates feeling pain, for this post, I want to keep things fundamental.

Most of us have seen a bug panic in our lifetime whether this is a group of stressed ants franticly trying to protect their nest, a fly trying to avoid threats, or a snail retrieving into its shell.

As the evidence is still very unclear either way, I’d prefer to give the benefit of the doubt that insects do feel pain. This is just my opinion.

This is a complex topic, and if you want to try piecing the puzzle together, check out this Wiki article and the references at the bottom. 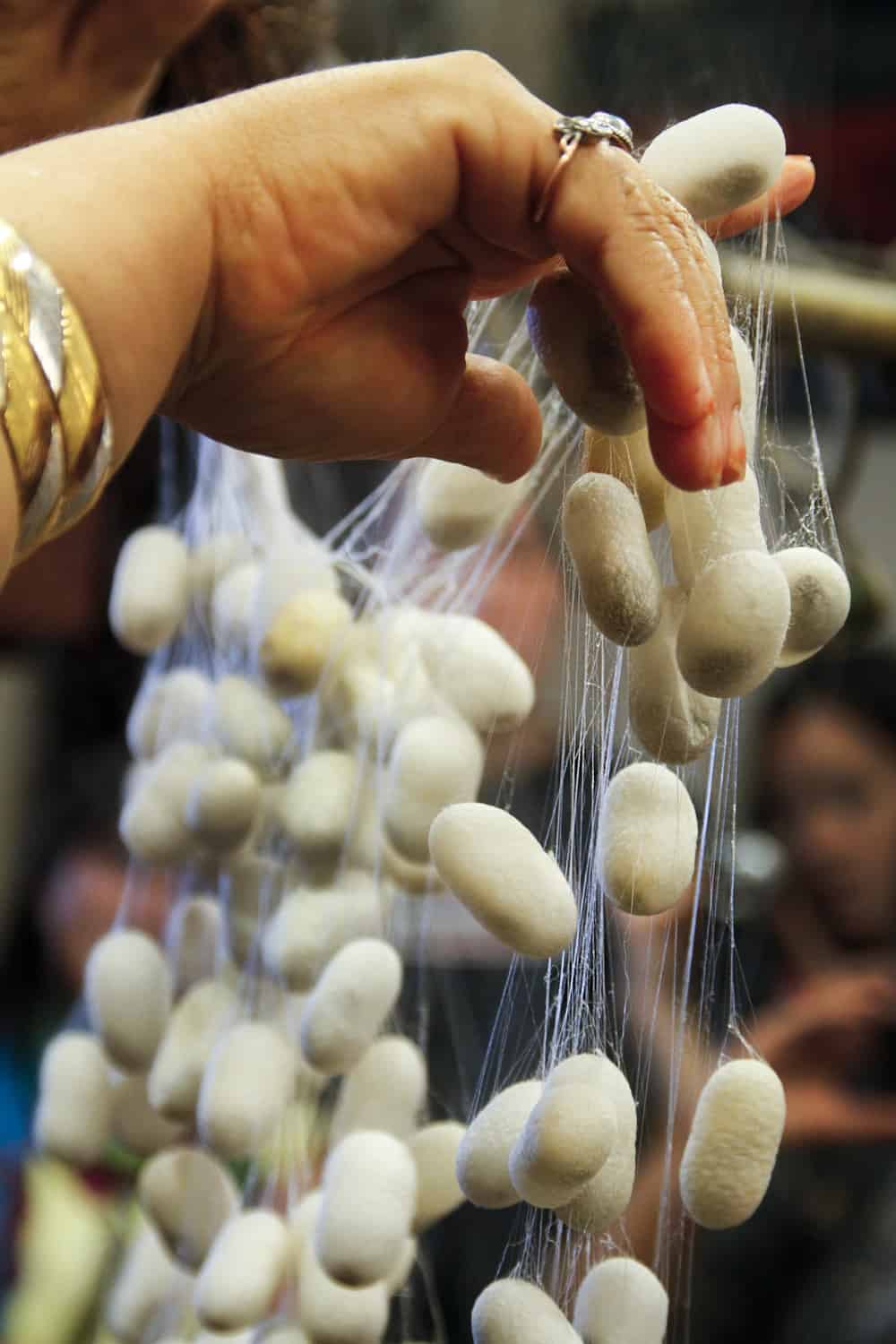 The conventional silk production process described above represents the majority of the overall silk market.

However, there’s a more ethical alternative called peace silk, which is also known as Ahimsa silk.

Peace silk is made by allowing the Bombyx mori to complete their transformation into a moth in the imago phase.

While this is a less harmful way of silk farming, it comes with major commercial trade-offs including:

Because of these compromises, peace silk is twice as expensive and far less profitable than conventional silk. This makes it challenging for designers to sustainably work with peace silk in the global marketplace.

Peace silk labelling and other alternatives

There isn’t an official peace silk certification which makes it even harder to trust the integrity of suppliers who claim to be using cruelty-free silk.

Peace silk does not guarantee organic production. So if you want to be sure you’re not only supporting cruelty-free silk, but also environmentally-friendly silk, you need to pay attention to organic certifications.

As explained by sustainable textiles expert, Summer Edwards, in conventional silk production, the Bombyx mori are fed mulberry crops that require some pesticide and fertilizer.

Therefore, supporting organic silk ensures no harmful chemicals were used in the process of growing the mulberry plants.

Another label to look out for is wild silk, or more specifically, Tussah silk. Tussah is a different type of caterpillar to the Bombyx mori and usually doesn’t require the chemicals used in mulberry silk. Depending on where it’s sourced, Tussah silk can be cruelty-free and eco-friendly.

Other options for alternatives to mulberry silk include:

Lastly, just keep in mind that much like eggs, to farm Bombyx mori with the intent of extracting their cocoons is an exploitative relationship. We are farming these animals for profitable gain.

It’s always worth considering if it’s all really worth it? As someone who hasn’t used silk for over six years, I can tell you, it’s easy to live without it.

Besides, many silk products are niche luxury goods and are non-essential to the everyday mindful consumer.

What do you think? Is silk vegan?

Hopefully, after reading this post, you feel more confident in the implications of the silk production process and how it compares to alternative methods.

But I’d love to hear from you now. What are your thoughts about the silk industry? As a vegan, do you choose to support silk?

Let me know in the comments below.