The Negative Effects of Clutter: Backed By Science 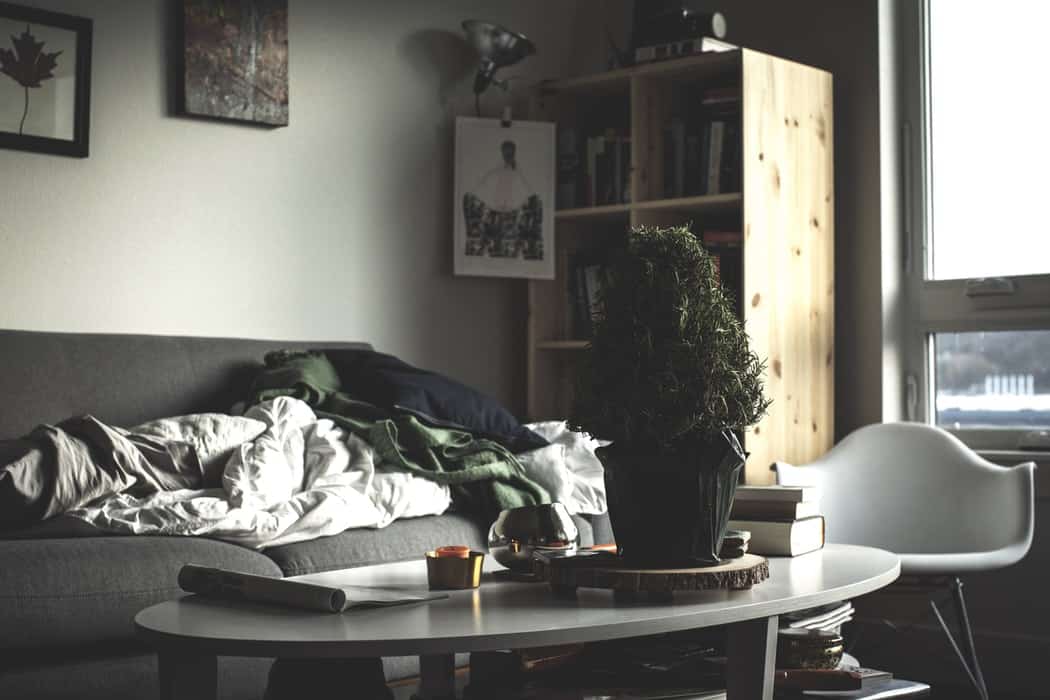 Despite the negative effects of clutter, I’m fascinated with why most of us don’t prioritise removing clutter from our lives.

I’ve personally experienced incredible benefits as a result of applying minimalism. But perhaps my experiences alone are not enough to convince everyone that reads this to declutter.

I get it. It’s not exactly fun (well for most of us) to deal with our things. But it doesn’t mean we should continue to accept our current situation.

So I thought to spend the last week as a student, scanning and dissecting white papers to find the negative effects of clutter.

And no, this is not an essay. It’s a blog post. So I’ll be sure to break down this research in a digestible format.

Unsurprisingly, I found that clutter can have quite the effect on our stress levels, overall health and productivity.

Hopefully, after seeing the results from these studies, you’ll have the motivation to take action finally!

But before I get into my findings, let me give you a quick refresher on the definition of clutter.

In the research paper titled: The dark side of home: Assessing possession ‘clutter’ on subjective well-being, clutter is defined as an overabundance of possessions that create chaotic and disorderly living spaces.

Clutter, as it relates to minimalism, is anything unnecessary—physical or non-physical.

This is where things get philosophical because how do we determine what’s necessary or unnecessary? I’ll save the answer for another blog post 🙂

So clutter is all of your physical possessions that are lying about without any order. It’s interesting though, because we naturally crave order.

Look at the human body, for instance. All of our cells, tissues, organs, fluids work together like a well-oiled machine. When our body is not operating in an orderly manner, we get ill or die.

So if we need order internally, it’s only natural for us to seek order externally. Well, you’d think so.

As economies feed off our consumerism, obtaining more things becomes the goal in life. It feels safer to have more than you need. It’s why we overpack when travelling, or overcook when preparing food.

Then once we accumulate possessions, we do our darnedest to keep them—whether they’re adding value to our lives or not.

But at what cost? Let’s investigate using two case studies.

Cortisol is a stress hormone produced by your adrenal glands. As this article explains it, think of cortisol as your body’s built-in alarm system.

It works with your brain to control your mood, motivation and fear. It’s best known to help us deal in a time of crisis. However, cortisol is also responsible for:

If your body alarm is on all the time, it’s going to throw all of your regulators out of whack. As a result, imbalanced cortisol levels can significantly impact your overall health, including:

So yeah, cortisol is a big deal, and it’s not something to take lightly.

What’s the right amount of cortisol?

Without going into too much detail, our brains can sense if we have the right amount of cortisol in our blood. If the levels are too low, the brain sends signals out to produce more.

Our adrenal glands (located on top of our kidneys) pick up on these signals and increase hormone production. Cortisol receptors, which are found in most cells, pick up the hormones and use it as needed.

For example, when your body is on high alert, cortisol can alter or shutdown digestive and reproductive systems that are getting in the way. It’s also responsible for injecting more glucose into your brain.

Cortisol levels are at their highest first thing in the morning within the first hour of awakening, declining significantly over morning hours, then tapering off throughout the rest of the day before going all the way down before we go to sleep at night. 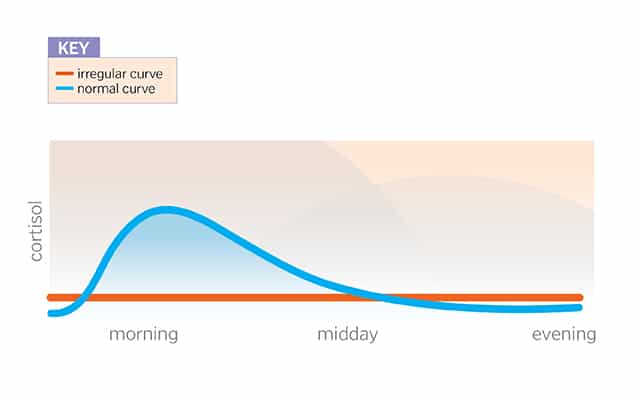 Image reference: How to Balance Your Cortisol Levels

The correlation between clutter and elevated cortisol

To understand the relationship between clutter and increased levels of cortisol, I’m going to reference a study called No Place Like Home: Home Tours Correlate With Daily Patterns of Mood and Cortisol by Darby E. Saxe and Rena Repetti.

The researchers analysed 30 middle-class dual-income families, living in a large U.S. city. Data was collected through videotaping, physiological questionnaires, and saliva sampling to test cortisol levels throughout each day.

Wives who described their homes as cluttered and more stressful, had flatter slopes of cortisol throughout the day, an indicator of chronic stress and all of the other health problems associated with it.

Get this—some women put off coming home from work because they didn’t want to deal with their clutter! They viewed clutter as a constant reminder of incomplete tasks, and as a result, women, in particular, find it very hard to relax when they get home.

In contrast, wives who described their homes as restorative clutter-free environments had steeper cortisol level slopes. They showed signs of relaxation and decreased depressed mood throughout the day.

Ironically (or ahem, not so ironically), there wasn’t the same correlation between elevated cortisol and clutter found in the husbands in the study. This is not to say that clutter has no negative impact on men (more on that later).

But generally speaking, the wives felt more shame, guilt and frustration living in a cluttered environment than their husbands.

The study concluded by stating that perceiving one’s home as being cluttered or unfinished could directly trigger stress reactions and depressed mood, whereas viewing the home as more restorative might alleviate negative states.

To understand how clutter disrupts our focus, we first need to look at bottom-up and top-down processing, as it relates to our perception.

Bottom-up processing is stimulus-driven. We develop our perception based on sensory data, e.g. sight, hearing, touch, scent and taste. In other words, we are assessing the content, purely as our sensors perceive it.

Let’s say you go to your favourite cafe to grab a cup of coffee. Your perception of the coffee you ordered is based on how it smells, tastes and looks. If the coffee is too hot, too sweet, or too small, you’ll develop your perception accordingly.

Top-down processing is context-driven. We develop our perception based on our goals, expectations and previous experiences.

Let’s go back to the coffee example. Your perception of the coffee you ordered would be dependent on whether you’ve had coffee from this cafe before, if you intended to order a cup or a mug, and how this coffee will make you feel to start your day.

According to the study Interactions of Top-Down and Bottom-Up Mechanisms in Human Visual Cortex by Stephanie McMains and Sabine Kastner, bottom-up and top-down processes compete with each other when processing visual stimuli.

This has some severe implications on our ability to focus.

When focusing, our brain is trying to filter out extra stimuli (bottom-up) and focus on what we’re trying to achieve (top-down) at any given time.

For example, it requires a lot of top-down processing for me to sit down and write this article. I’m making a lot of assumptions, connecting dots and setting goals for each section.

However, when I go to write, I’m presented with varying degrees of physical clutter within a few metres radius from where I’m sitting.

While focusing on this article, my brain is also processing everything I can see next to my computer, random noises and smells.

The more stimuli in my environment, the more bottom-up processing is required, thus stealing my attention away from top-down processing.

The fewer stimuli in my environment, the more capacity I have to focus.

Other examples include noticing mail on the kitchen counter when trying to cook a new recipe.

Or notifications are going off on your phone when you’re trying to read a novel.

I can relate to the challenges of competing processes, as my ability to focus is much easier when I have fewer stimuli to distract me.

In a culture that celebrates multitasking, think about what we could do if we gave our bottom-up processing a break? We would be more reflective, creative and set meaningful goals. And it all starts with clutter.

Other negative effects of clutter

The impact of clutter on our cortisol levels and focus are just a few of the many negative effects of clutter. Other examples I came across include:

Then there are more obvious examples like the inability to find things, or not being able to use space that would typically be available.

With so many negative effects of clutter, it wouldn’t surprise me by now that you’re starting to feel a little overwhelmed. And to that, I say, good! That’s what I was hoping for 🙂

The problem with decluttering is that it’s super easy to put off doing.

If you didn’t think that clutter wasn’t impacting your life, or you know of the effects, but are procrastinating to take action, hopefully, this post has motivated you to do something.

Do you recognise the negative effects of clutter in your life?

Now I want to hear from you. If you’ve successfully gone from clutter to clutter-free, do you remember what pushed you to take action?

And if you haven’t started decluttering, what examples above resonated with you the most?

I look forward to reading your responses in the comments below. 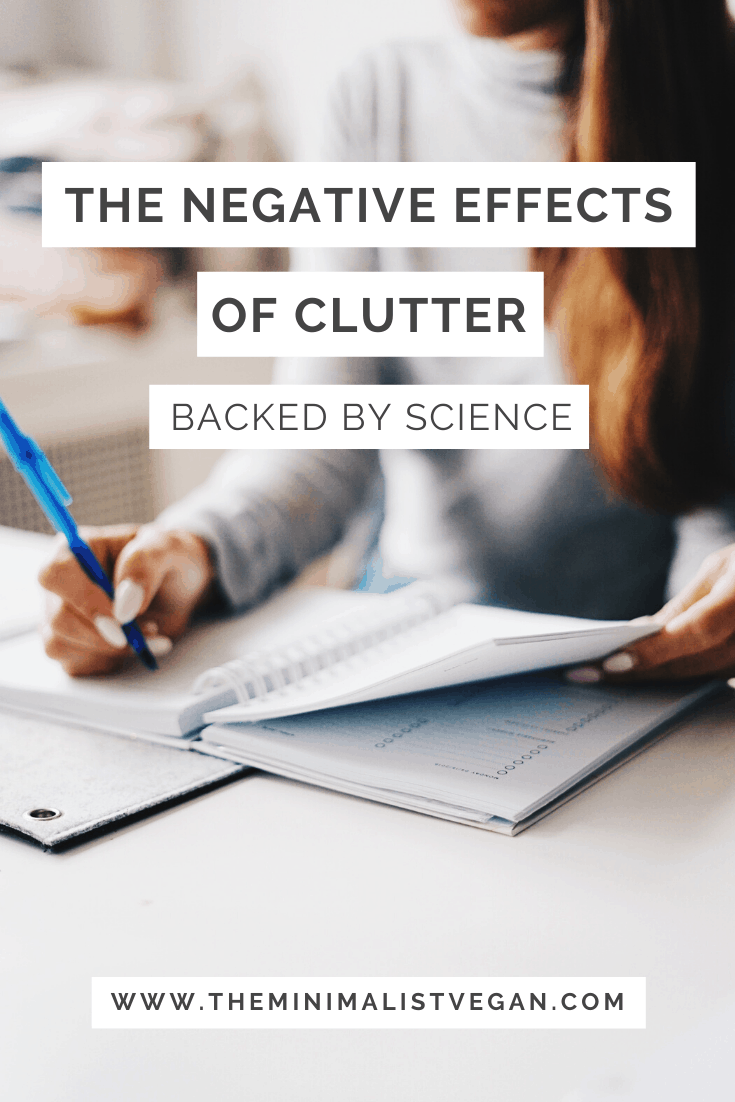 9 thoughts on “The Negative Effects of Clutter: Backed By Science”