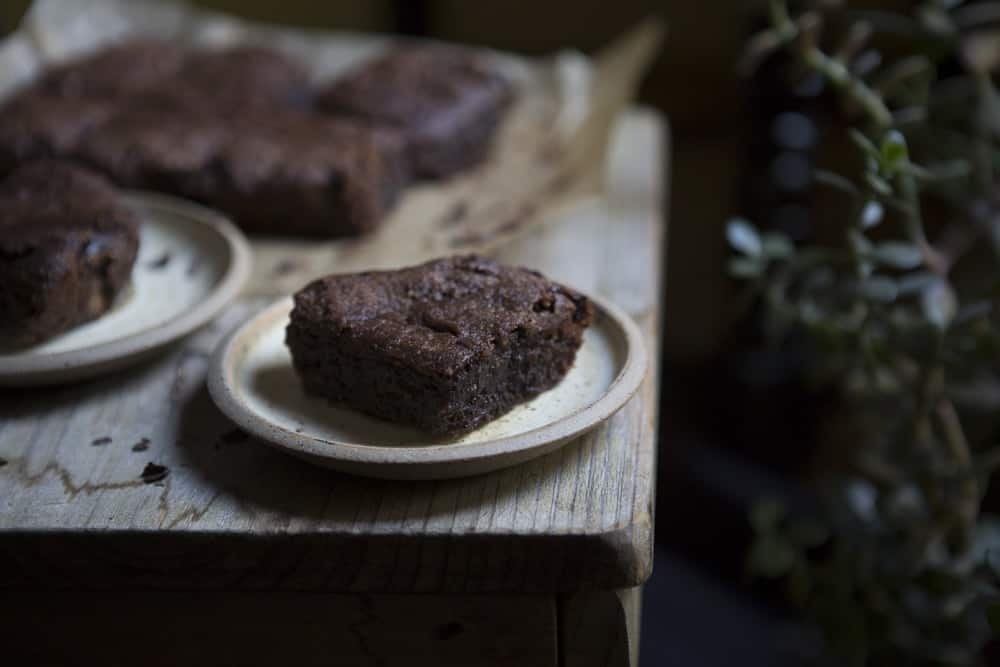 I don’t do much baking, but when you have friends coming over for dinner, you put in the effort. These vegan chocolate brownies that also happen to be gluten and sugar-free, as well as candida diet-friendly, were an absolute hit! I served it with vanilla coconut milk-based ice cream to Michael and our friends, and I just had it with some coconut cream.

Why I HAD to make a vegan chocolate brownie recipe

Outside of the obvious reasons for making any brownie recipe, this one is particularly special to me. See at the time; I was doing an elimination diet so that I could be de-sensitised to wheat and also detox.

With my love for pasta, pizza, bread etc. this was a big deal for me. But only good quality stuff, none of the cheap, processed crap. However, every time I took a mouthful, I would look like I was six months pregnant and have other symptoms that gave me a lot of discomfort.

With other things brewing that I can’t talk about just yet, being able to eat wheat comfortably was going to make a massive difference in my life.

So, trying to get my health right meant that I had to eliminate all types of sweeteners (including fruit), starchy vegetables, mushrooms, legumes, beans, corn, rice, wheat, soy, some nuts and anything that came in a packet. I was eating similar foods pretty much every day.

The only sweeteners that were allowed were stevia (which I’m not a fan of) and xylitol. Now, I’ve used birch xylitol before and was familiar with it, so using it in desserts wasn’t an issue. It’s a great sugar substitute for people with diabetes as well.

My search for a candida-friendly dessert

I explored a few different recipes that had ingredients that I couldn’t have sugar, maple syrup, arrowroot, cornstarch and tapioca and played around with what I could have. Now, on the note of xylitol, the only problem is that it’s highly toxic to dogs. So please be very careful when using it!

So considering that I was trying to make a dessert for a candida-friendly diet and would also be nice for everyone else, the pressure was on.

This recipe turned out so well that I even surprised myself! Even now that I’m not on the super strict diet anymore, I would still make it. If you don’t want to use xylitol, you can substitute it for regular raw sugar or coconut sugar instead. And the chocolate used can be just plain vegan dark chocolate chips.

Now, get excited. You will fall in love with the simplicity and deliciousness of this recipe. I would love to know what you think of it!

* Here in Australia it's hard to come by almond flour, so just used a blanched almond meal. It works just as well.

* Make sure you use the one that is from the birch tree, not corn-derived. Check the ingredients. You want 100% birch tree xylitol. If you're not after a sugar-free alternative, then raw sugar or coconut sugar will do.

* I make my own to avoid any fillers and sugars in the milk. Soak half a cup of almonds overnight, rinse next day. Add to blender with 750-1000ml water and blend until smooth. Strain the almond milk through a nut milk bag and bottle the liquid. I typically keep the almonds that remain in the nut milk bag to add to porridge, smoothies etc.