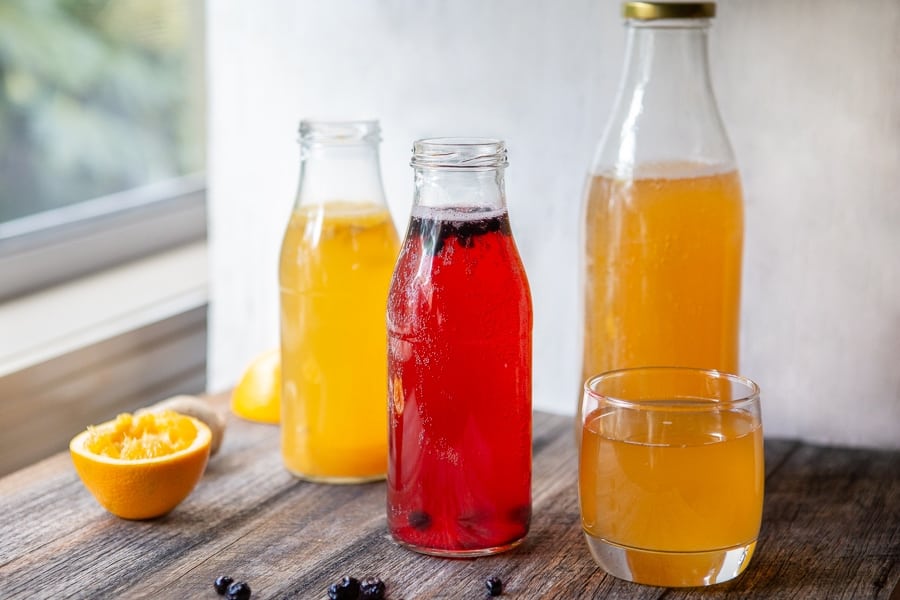 I’ve been making homemade kombucha for about five years now.

I remember when I got my first SCOBY and starter from a fellow health coach in a little jar. She gave me all these instructions and things to watch out for to give me the best chance of the kombucha succeeding.

I quickly jumped online, watched a few videos, and made sure that I was super prepared. I ended up being pretty overwhelmed by all these ‘rules’.

What I soon realised was homemade kombucha is a super simple, cost-effective way of getting good bacteria in your gut.

The problem with store-bought kombucha

It’s no surprise that kombucha has become very popular around the world as a healthy soft drink alternative. Even though I’m constantly brewing my homemade kombucha, I still find myself buying some when I’m out from time to time.

However, my main problem with the store-bought ones is that most of them are super sweet. When it’s really sweet, it means that the bacteria haven’t had the chance to eat enough sugar yet (which is the fermentation process), or that they have added sugar back into it to make it almost like a soft drink to appeal to a broader market.

This defeats the purpose of drinking kombucha for its benefits completely!

Don’t be put off by how your SCOBY looks!

When you get yourself a SCOBY (stands for Symbiotic Culture of Bacteria and Yeast) and some starter (which is just the liquid from the previously made batch—like a sourdough starter), if you look after it well, you can have homemade kombucha for years to come.

What you see above is an image of what the SCOBY looks like. It takes some time to get used to it when you first start making it. The idea of seeing a fungus growing inside of a big jar with tea may sound a bit odd, but trust me, it’s so worth it!

Kombucha is a fermented tea that is typically made using black tea, water, sugar, a SCOBY and starter. It’s a drink that has been around for thousands of years but has only recently made an appearance more widely. It can now be found in most cafes and supermarkets.

I remember trying kombucha for the first time at a market when I was at the coast with my family for a holiday about eight years ago. The kombucha drink grabbed my attention as I was curious to know what this fermented tea would taste like.

I’ve been into health foods for a while, and I thought it was really interesting. I gave some to my dad to taste, and he said that his grandma used to make it when he was a little boy. Like sauerkraut, it has been around for a really long time but has only now started growing into the commercial market.

Even then, nothing quite beats a fresh brew of your very own homemade kombucha. Trust me, you’ll be hooked!

Kombucha can vary in taste depending on which tea is used, what the sugar/water ratio is, how long you leave it to ferment, and what flavours you add to it when bottling.

You can see in the image above that I use a large jar to brew my kombucha in. You can use something like this or I’ve seen others using a dispenser style glass jar so once the kombucha is finished, they can just use the tap to pour some out and refrigerate it.

The jar I use holds around three litres. If you have a big one like mine, just double the recipe ingredients below (you’ll only still need one SCOBY, just more of the starter liquid). You can see multiple SCOBY’s in that image; I tend to leave them in there as one new one is formed each ferment.

Just make sure that you remove the jar lid and put a piece of muslin cloth over the top and keep it down with a wide rubber band. Cheesecloth or a thin tea towel will also work. As long as there is enough space for air to circulate through the kombucha as it ferments. You want to put something on top to keep any bugs coming in.

I’ve chosen to show you three different ways to finish off the kombucha with two different flavours and one being the plain original flavour—which is just the recipe without any additional flavour.

For the 1.5 litres (recipe below) you will need:

Leave it out on the bench in well-sealed bottles for 1-2 days and then place in the fridge until you’re ready to drink. Strain before drinking – unless you like the bits of ginger to chew on. I find that this flavour combination tastes like flowers for some reason!

For the 1.5 litres (recipe below) you will need:

Leave it out on the bench in well-sealed bottles for 1-2 days and then place in the fridge ready to drink. It will release a beautiful pink colour. Strain before drinking – unless you like the blueberries to chew on.

Keep in mind that the sweeter the kombucha, the less fermented it is. If it’s too vinegary/acidic for you, ferment it for less time in the next batch. If it’s too sweet, leave it for an extra few days. The less sweet it is, the healthier it is, as the sugar has been eaten by the bacteria.

Try and test it before you flavour it to make sure you’re happy with the flavour balance. The way that I gauge how long to ferment it for is based on the season and the temperature in my kitchen. In summer, it takes around 7-10 days, and in winter it can take around 3-4 weeks. This batch took about three weeks as we’re in the middle of winter.

Try and avoid letting the SCOBY come in contact with metal; it will weaken it over time. So don’t ferment it in a metal jar/container.

Make sure that everything that you use in the production process is clean. You can easily contaminate it, which will lead to growing mould. Also, try and avoid using wood as it tends to absorb flavours and foods from what you’ve been cooking.

If you’re wondering where you can get your hands on a SCOBY and some starter, ask around in your circle of friends and family. Someone might have a spare. If not, they are easily accessible online like here and here as well as some health food stores. Please feel free to ask me any questions you might have about making your own kombucha at home as I probably missed some details in the post. Enjoy it 🙂

If you start to notice white, black or green patches/spots forming on the top, that means it’s mouldy. Do not try and revive it. The mould has spread through the whole mix. Discard it and start again. This is why it’s always a good idea to keep some starter and a spare SCOBY in a plastic container in the cupboard (in plastic so you don’t have to remember to ‘burp’ the bottle as it can explode from all the gas build up inside).

2 thoughts on “How To Make Homemade Kombucha Three Ways”