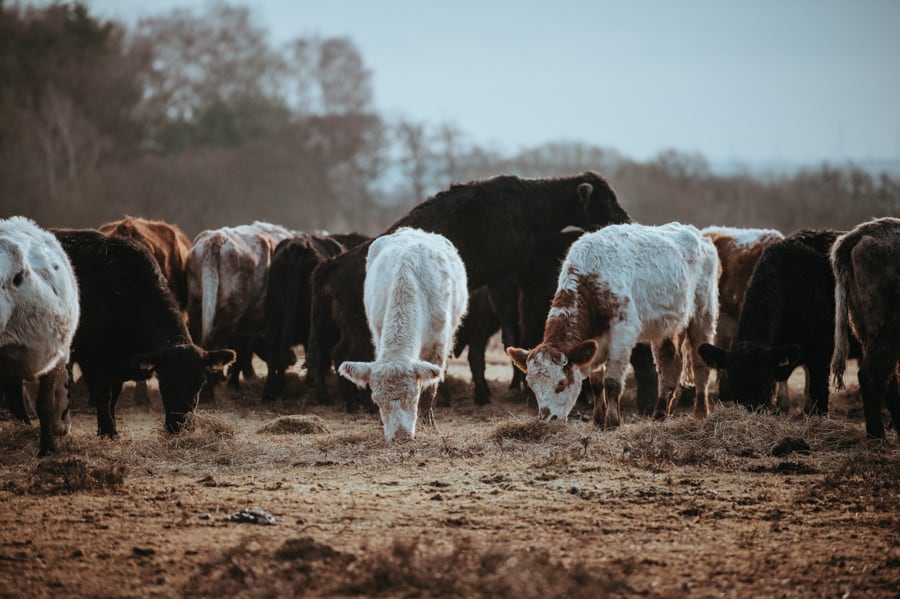 Michael and I spent the last few days away shooting new images and video to freshen up the website on a beautiful property a couple of hours away from home.

We were both so excited to be doing more creative work together and to go somewhere new for some inspiration. It certainly did the trick! Even though we were working 12-14 hour days, we enjoyed every minute of it.

After spotting the two beautiful cows on the property that had become pets to the owner, we struck up an interesting conversation with her. She was curious to know, like so many, why we became vegan.

The story started, as always, with the explanation that it happened overnight after watching the documentary Earthlings. Then the conversation led to her talking about a friend that sells produce at the local farmer’s markets.

She went on to explain that they raise livestock. Chickens, pigs, cows and goats. The chickens and cows are used for their milk and eggs and then sent to slaughter for their meat. This was the sole purpose of the pigs, and the goats were spared as they were considered pets. So they were milked but enjoyed a longer life.

One thing leads to another

She then went on to mention that she asked her friend about the animals and how she feels knowing that the animals that she has grown a bond with end up going to slaughter once their time is up. The farmers’ response was “well, it’s just one bad day”. By the look at her reaction, she wasn’t sold on that answer. And neither were we.

That “just one bad day” is THE day that the animal’s life is taken away from them. It’s not one bad day, as this would imply that they have days to follow. I believe this is the coping mechanism for her to be able to send them off to slaughter and feel somewhat okay with it.

The interesting part is that the goats are treated like pets (well pets that are still exploited for their milk). So some animals will be able to live out their lives, and the others have an end day in mind.

This got me thinking about speciesism and how we see some animals as pets and others as food. Why is one life more important than another? Why does that animal’s life have more value in the eyes of one human being and not in another?

We’re lucky to be human

It’s very liberating to be a human being and know that you have an opportunity to live a long life. Sure we can’t predict when we’ll die, but we all feel optimistic about living till we get old. In fact, many humans dream and try to think of themselves as older.

Imagine if that gift of old age was already taken away from you before you were born? Your life as a pre-meditated expiry date by another species. Feels wrong, doesn’t it?

The real problem here is that you would have no clue, yet they have it booked in their diary.

Imagine being a dairy cow, forcibly impregnated time and time again. Feeling the sadness and deep sorrow of your babies being taken away from you each time so that your milk could be taken for another purpose that it wasn’t naturally designed for.

After a few years of this vicious cycle, when you think you’ll be given some freedom after an exhaustive life of being constantly pregnant and milked, your one bad day comes around. If you believe that dairy is any better, think again. They suffer just as much, if not, even more than animals raised for meat.

On our way back home in the car, Michael brought up the interesting fact about how I used to view and justify eating animals before becoming vegan.

Around 7-8 years ago, I used only to eat meat if I bought it myself and I knew its source. The typical way that I would buy it would be through a small organic butchery halfway across town, or at the local farmer’s markets on a Sunday morning. It had to be free-range, grass-fed and organic. I was passionate, and I cared about how the animals were treated.

I cared about what they ate, how much room they had to graze on and enjoy outside, and how many animals lived on the farm.

It never crossed my mind that these animals were bred and killed pre-maturely. That their lives ended when their time was up—not because they were getting old and had lived a long and happy life.

The result is always still the same. Their life is ended for a profit so that we can consume them. It’s not just one bad day.

I used to justify supporting this behaviour because I felt okay knowing that the animal didn’t suffer until they took their last breath. That was enough for me; they didn’t see it coming. However, deep down inside, this was my coping mechanism to say that it was okay to continue to consume animals products.

Factory farming, on the other hand, is simply a torture chamber for animals to make the most money by using up the least amount of resources. They would suffer every day, not just have a bad day. Either way, they both end up in the same place.

No way around it

Now when I talk to someone that is of the same opinion as I was, I can understand. But what inevitably comes out of my mouth is that there really is no way to justify ending another beings life for our taste buds and the back pockets of those that exploit them. As long as we continue to have plant-based alternatives, there never will be a reason for this to be okay. Period.