Is It Okay For Vegans To Eat Eggs From Backyard Chickens? 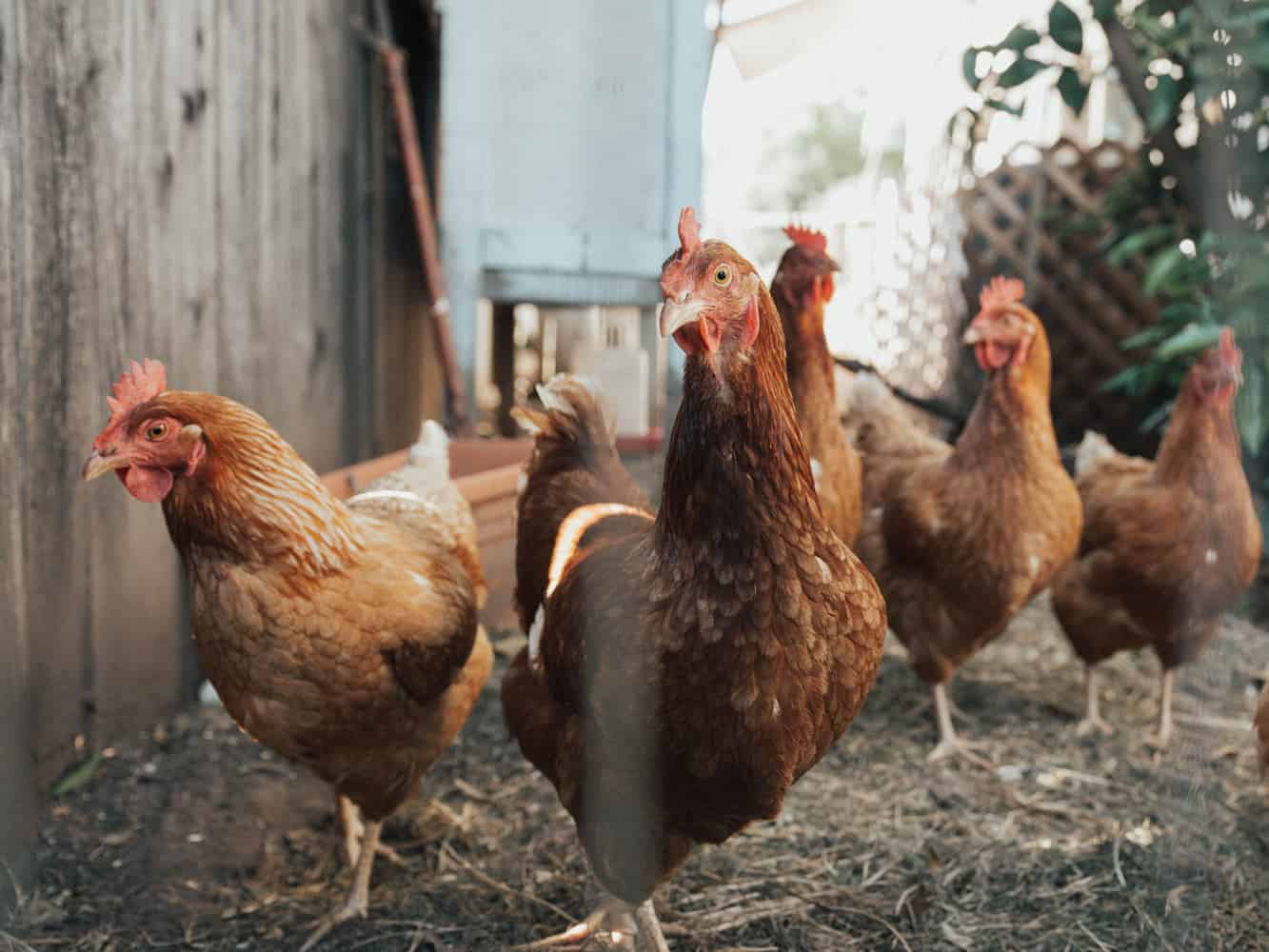 The inspiration for this article came to me after a conversation I had with a friend who recently became vegan, whoo! It’s also very fitting to talk about backyard eggs during Easter.

She listened to our podcast and was inspired by our vegan origin story. She went on to watch Earthlings and became vegan after she made the connection between her consumption behaviour and the exploitation of animals.

It was surreal to hear her journey. However, there was just one little tiny detail that was interesting to me. She said that she was vegan, BUT still eats eggs from her aunt’s backyard chickens. So I guess she would be considered what they now call a “veggan?”

On the surface, I can totally understand this position. It appears to be harmless to consume eggs from hens that have leftover eggs that would potentially rot away.

It seems impractical to waste food, where no harm is done to the chicken.

My friend’s story is not in isolation. I’ve heard this position time and time again. “What about eggs from backyard chickens?” Or “I’m vegan, but I still consume eggs from my chickens at home.”

Then almost like destiny, Maša sent me this podcast episode from The Disclosure Podcast, where Earthling Ed breaks down the question, are backyard eggs ethical?

Ed, as always, made some excellent points, which inspired me to do some more digging. And digging I did.

I personally had so many questions about this and have finally taken the opportunity to answer all of them.

Where do backyard chickens come from?

Sourcing chickens is the first ethical consideration when it comes to backyard eggs. Where did they come from, to begin with?

Backyard chickens typically come from breeders. A simple online search for “backyard chickens” will link you up with breeders to purchase your chicken. These breeders are only interested in hens (female chicks) and crush up (or suffocate) day-old male chicks as they cannot reproduce, as they’re effectively useless to them.

Maybe you thought that breeders grow male chicks for their meat? As it turns out, the egg industry isn’t in the business to raise and care for chickens as the amount of time it takes isn’t profitable.

If you buy hens from farmers, you’re encouraging the suppliers to buy more chicks. It’s a supply and demand business. Farmers treat chickens like inventory. That’s why the accounting world refers to farmed animals as “livestock”.

At the end of the day, you’re still giving money to the hatchery industry and supporting the exploitation of birds. It’s as simple as that.

How many eggs do hens lay naturally vs hens that have been manipulated through selective breeding?

What shocked me was the drastic difference in numbers in what a wild red guinea fowl would lay compared to hens as we know them now. Naturally, they’re only meant to lay 12-20 eggs a year, and typically it would be in Spring. This is also for the purpose of reproducing.

When talking to Maša about this post, we couldn’t help but draw the comparison between hens and women. Think of how women on average have their period twelve times a year. Hens are also designed to go through that same process.

We’re essentially exploiting another species reproductive system for access to their eggs.

Looking at the numbers, in 1905, hens produced approximately 120 eggs a year on average. That’s a lot!

Brace yourself for what egg-laying hens produce now. 200-350 eggs a year! That’s almost one every single day. Staggering isn’t it?

I mean, consider this from a compassionate viewpoint, you start to question why we would do that to them. Ladies, imagine having your period pretty much every day of the year!

Chickens instinctively lay more eggs when their eggs are taken away from them. So when we take eggs away, we’re encouraging them to lay more eggs in what is called a clutch. A clutch is simply a group of eggs being produced by the hens in one period. So, the less we take, the less they lay.

What is involved in chickens laying eggs?

So, let’s clarify something here. For a chicken to lay eggs that turn into chicks (fertilised eggs), a rooster needs to be involved for the hen to store the sperm in an internal cavity. During the egg making process before the shell is made, there is a step where the fertilisation happens. This is how a new chick is made.

In situations where no rooster is involved, this process is skipped (not entirely, but just nothing happens). These are the eggs that end up on our shelves in the shops; they’re not the chick hatching kind.

So much goes on for an egg to be produced inside a hen’s body, it’s downright extraordinary. If you’re interested in learning more about how eggs are made, this video demonstrates it nice and quick. Or if you’d prefer a more detailed one, here is another video.

For each egg a hen produces, they excrete 10% of the calcium (for the shell) that is stored in their bones. This is why you’ll often see egg-laying hens with weak or broken bones, osteoporosis or even paralysis.

You might also think (just like I did) that the feed they’re given replenishes those nutrients from passing eggs. Unfortunately, they’re not if you’re talking about the cheap feed that is given to them on egg farms and in backyards.

What I wasn’t aware of is that hens have a natural tendency to eat their own eggs to replenish the nutrients that are lost during the egg-laying process.

There are a few things that can go wrong with egg-laying chickens. Eggs can get stuck inside them, and unfortunately, if they break, it can get infected and they can die if gone untreated. One of the reasons this could be is because they don’t have enough calcium in their system to make a strong enough eggshell.

What is the life expectancy of a farmed hen vs a wild hen?

Wild (not farmed and exploited) chickens live between 10-20 years. In the egg industry, most chickens are slaughtered at 18 months of age. That’s after 12-16 months of rapid egg production.

As you can see, their life span is drastically shorter—as with any other animal that is being exploited for their bodies. Once a hen stops laying eggs, they’re sent to slaughter and used for all kinds of purposes.

This information is to give you a bit more perspective of the eggs that someone might buy in the supermarket. I would say that the hens that you have in your backyard would live longer than the battery egg chickens.

However, if we take their eggs, it triggers them to lay more eggs than what is biologically expected, thus reducing their average life expectancy.

What about a rescue hen?

Now I know many of you might be thinking, why can’t I provide a safe and open environment for a rescue hen as a pet AND get a couple of eggs at the same time?

We need to shift the paradigm of how we view chickens. When we adopt a dog, for example, we do it out of the reciprocation of love. We don’t adopt a dog with the expectation of the dog producing food for us.

The moment that we expect to receive eggs from hens in return for looking after them e.g. feeding, space, companionship, this is effectively a business exchange. And whether we like it or not, that chicken is an asset, not a pet.

Are we prepared to support a backyard hen the same way you would a cat or a dog?

After a quick search, I found that a hen would only cost $20-$30 from a hatchery! That’s super cheap by any standard. We’re talking about a living creature.

Now if anything goes wrong and your backyard chick needs to see a vet, most people would dispose of that chicken and get a new one.

So I have a confronting question for all of us to ponder;

If a vet bill would cost $500 for your chicken if you had the money, would you pay it?

We fork out this type of cash for other domestic animals, but if we’re honest with ourselves, our associated value with a chicken is much lower.

That’s because, for most of us, our relationship with backyard chicks is seen as an exchange, not a loving companionship.

Some things to consider if you have backyard chickens

If you have a chicken, feed the eggs back to her. She needs nutrients to stay healthy and strong. Even if she initially produces more eggs than you can feedback to her, it’s important to leave the rotten eggs in her environment for a short period of time.

It shows the chicken that her eggs aren’t being taken away from her, so she’ll most likely slow down her production. Leave the eggs in her nest, this way she will see that she doesn’t need to be laying more.

Think about having to make an egg and the amount of energy that it takes. It takes a hen 24 hours to make one egg. She would be constantly working on the inside to be producing eggs for someone that is taking them away.

It’s easy to overlook this fact. But being vegan is about trying to put ourselves in the shoes of the animal. Laying an egg is a significant event, which we’ve played down as a culture to feel comfortable with the idea of eating eggs.

Chickens are social creatures that have a strong memory, and emotion influences their social behaviour. They can form affectionate bonds with other species and recognise their facial features and mourn the death of other birds.

With an idea that starts as a small venture, more and more people become greedy and want to exploit the animal for their own benefit. So next time you see a chicken as an egg-laying machine, maybe consider her needs before yours first. They are sentient beings just like we are and they don’t make eggs for us to take. Period.

And to answer the burning question on everyone’s lips, no you’re not vegan if you eat backyard eggs. It’s a personal choice at the end of the day, but calling yourself vegan and consuming eggs can be very misleading and confusing for others.

There’s enough confusion around veganism as it is, so let’s not add to that moral ambiguity. Veganism is a way of thinking and feeling that doesn’t exploit or use anything that comes from an animal, human or non-human.

40 thoughts on “Is It Okay For Vegans To Eat Eggs From Backyard Chickens?”