I must admit, I haven’t used yeast in the kitchen much. I’m a newbie when it comes to baking loaves of bread, and other baked goods like pastries.

This is why I have found it intimidating to start experimenting and developing recipes like this homemade vegan naan. Working with yeast can feel like a completely new challenge, but I promise you, once you get the hang of it, you won’t be able to stop!

These vegan naans were the perfect way to ease my way into making dough. I love Indian food, and having naan with my curry is usually the highlight of my meal. I mean, how could it not?

I’ve experimented using different ingredients, and I found that this method turned out the best. I wanted a vegan naan that was:

And this naan ticks all the boxes! I’ve decided that I’ll also experiment with a gluten-free version soon, so watch this space.

I was wondering for the longest time what made naan not vegan-friendly. Not until I started researching and experimenting did I realise that naan usually has either ghee, butter, yoghurt or milk in it. Typically a combination of some of those ingredients. So naan is not generally vegan. 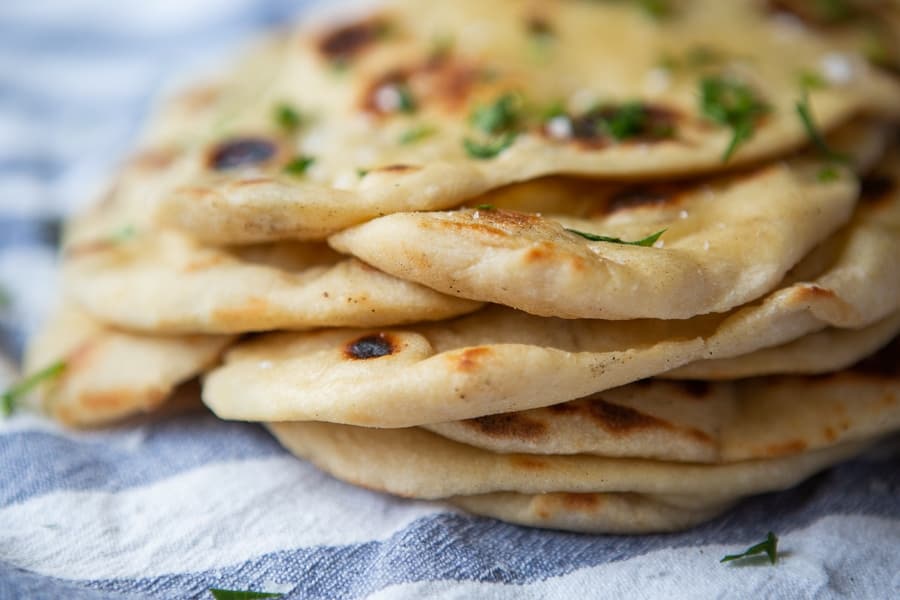 This is why I’m VERY excited that I managed to create one that was vegan and so much like regular naan you’d find at your local Indian restaurant.

I can’t believe I didn’t try this sooner as it’s easy to make, and best of all, hard to stuff up! Even though not all the experimenting I did turned out as a 10/10, we still enjoyed every single batch.

What to serve with vegan naan

It goes so well with my creamy red lentil curry, cauliflower and potato curry, matar paneer, as well as the palak sweet potato paneer.

You can easily use them as wraps, as a side or a snack. Every time I make them, I plan to freeze some, but they disappear before I get around to it!

I’ve taken some step-by-step photos to help you get an idea of how easy it is and what it should look like along the way.

In this recipe, I’ve used the active dry yeast. This is what the yeast mixture should look like once you’ve activated the yeast in the first step. It’s browner because I’ve used coconut sugar instead of raw sugar.

You could use both types of sugar, and even maple syrup should be fine too. I personally haven’t tried that method, but I don’t see why it wouldn’t work!

Once you’ve mixed the wet and dry ingredients, you need to let the dough rise. You can see from the pictures below, that it should double in size by the time it’s ready.

Once that’s done, when you roll it out, I wanted to show you how thin the naan dough should be rolled out. Since we’re cooking it on high-heat on a cast-iron skillet, you don’t want them too thick.

If they aren’t rolled out thin enough, they will be dense and heavy, not light and fluffy.

If you don’t have a rolling pin, just use a tall jar to roll out the dough, it should do the trick. No need to spend money on something you may never use again (besides for this recipe, of course).

I usually roll one out at a time as the other one is cooking, but wanted to show you how they look like in more detail.

How to get the beautiful bubble on the naan?

The best way to achieve the bubbles/rise in the dough is to put a lid on the pan as you cook each one. As I mentioned above, for the best results, use a cast-iron skillet on high heat.

Rather than brushing oil on the side that goes on the pan first, I just use water. Works really well and doesn’t set your smoke alarm off or make your house look like something is on fire!

I like to peek at the dough rise in the pan, has a weird satisfying feeling.

What if I don’t have a cast-iron skillet?

If you don’t have a cast-iron skillet, you can use your barbecue or bake them in the oven using a pizza stone.

Both alternatives will work well; you may just not achieve the amount of bubbles and fluffiness without using a lid to trap the heat.

Can the dough for this vegan naan be prepared ahead of time?

The dough can be prepared ahead of time if it’s inconvenient to leave it for the two hours as mentioned in the recipe.

Can the dough be frozen?

The dough can be frozen in individual dough balls. Just thaw out in the fridge first overnight, or on your kitchen benchtop for a couple of hours before use.

Now, onto the recipe! Trust me; you’ll fall in love just like I have.

* You can also use full-fat coconut milk. The dough will just be a little stickier, but still fine to work with it like that. If you feel that it's too sticky, just add a tablespoon of flour at a time until it is workable.

** If you're super short on time, you can skip this step but they may not be as fluffy.

The steps may look like a lot, but trust me, it’s easy. Once you get the hang of it, you won’t need a recipe to follow!